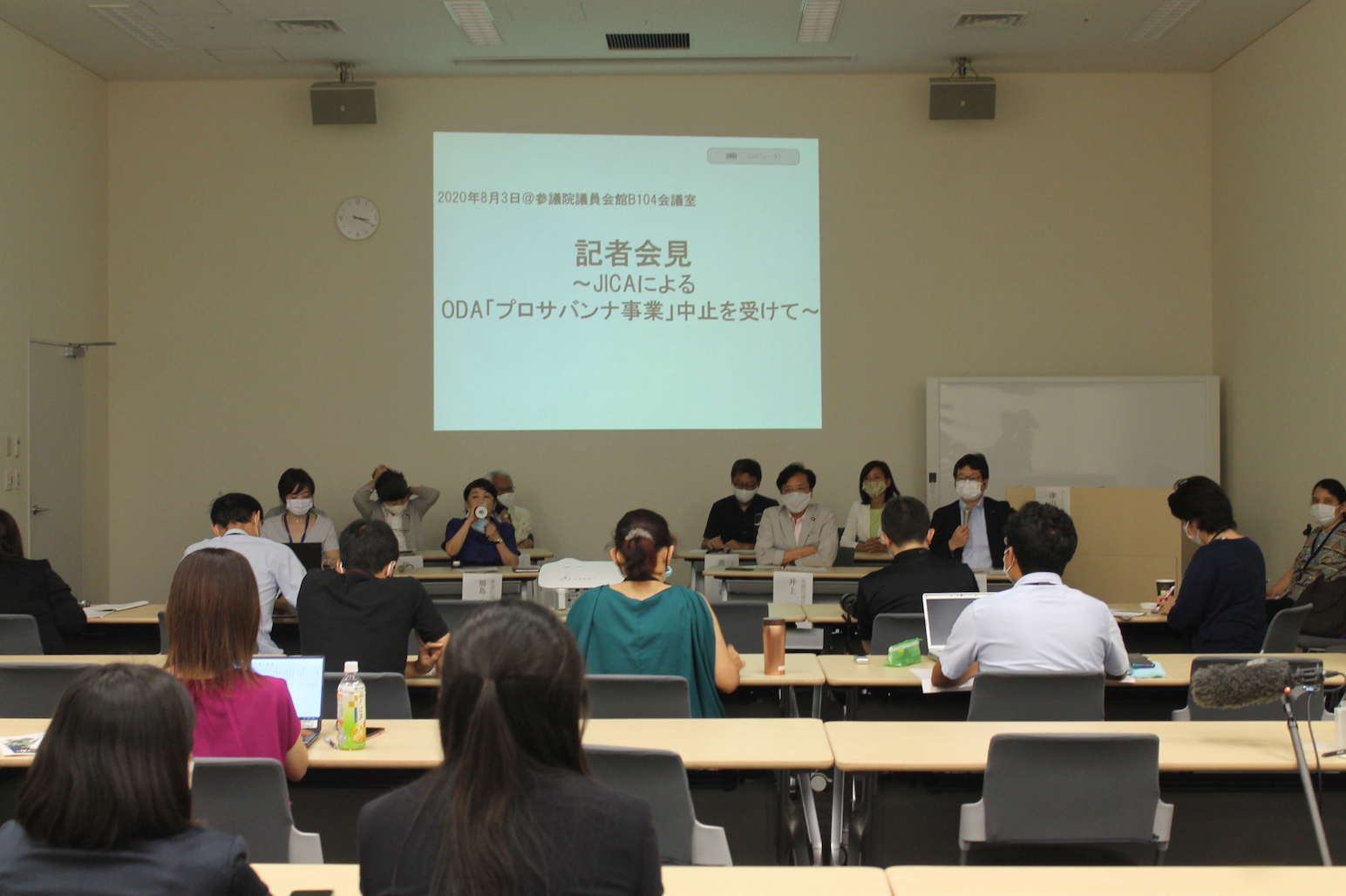 Press conference held following the end of Japan’s ODA ProSAVANA in Mozambique. It was covered by TV news and other media.

We continued to work in two main areas, “Networking and advocacy with people fighting against land grabbing caused by free trade” and “Advocacy on conflict and peacebuilding.” In 2009, Japan, Brazil, and Mozambique made a contract titled “ProSAVANA”, an agricultural development project in northern Mozambique, under the Official Development Assistance (ODA) program. Local farmers and civil societies raised an objection and we have been working with them to stop the project. But in July 2020, it was suddenly announced that the project would be effectively terminated. In response to the movement to create a country capable of war including the deployment of the Self-Defense Forces overseas, we have been involved in a lawsuit against the unconstitutionality of the Security Law. We continued to point out the problems of the Security Law from the standpoint of an NGO.

Since local smallholders raised concerns about the project in 2012, the situation surrounding the project has deteriorated, with increased threats and repression against local smallholders and civil societies. As a result, in 2017, the local lawyers’ association filed a lawsuit in the Administrative Court against the Ministry of Agriculture, which supervised the ProSAVANA coordination office. In 2018, the judges unanimously ruled that the project violates the right to know of the people of Mozambique and that the documents must be fully disclosed within 10 days. However, both the Mozambique and Japanese governments have not taken any action. We have continued discussions with the Ministry of Foreign Affairs (MOFA) and the Japan International Cooperation Agency (JICA) in collaboration with Diet members. In late July 2020, MOFA suddenly announced the termination of the project. The master plan, the main pillar of the project, was originally scheduled to be completed in 2013, but despite the fact that it took about eight years and 800 million yen to complete (the total project cost was about 3.5 billion yen), it was terminated without being completed, which in effect meant cancellation or suspension. However, no explanation has been given either to local smallholders and local citizens or in Japan regarding the reason for the termination. The project ended without any response to the requests from smallholders and citizens based on specific cases and surveys. We believe that a review of the past 8 years of this project is necessary and have begun to work with other organizations and Diet members.

In addition to ProSAVANA, the Japanese government is developing resources (coal and natural gas) and infrastructure (railways and ports) in northern Mozambique known as the Nacala Corridor Development. Japanese companies such as Mitsui & Co., Ltd. are involved in both projects and huge amounts of public funds from the Japan Bank for International Cooperation (JBIC) and Nippon Export and Investment Insurance (NEXI) are being invested. However, there are reports of damage and human rights violations such as destruction of the environment and livelihoods as well as forced relocation of farmers and fishermen. Particularly in the Cabo Delgado province, where natural gas development is being carried out, the Islamic armed group (which calls itself IS) has emerged against a background of development disparity and dissatisfaction with the damage it has caused. This has resulted in many casualties and more than 700,000 internally displaced persons (Mozambique has a population of 30 million, and the Cabo Delgado province has 2.2 million). We will continue to monitor the situation and make policy recommendations. 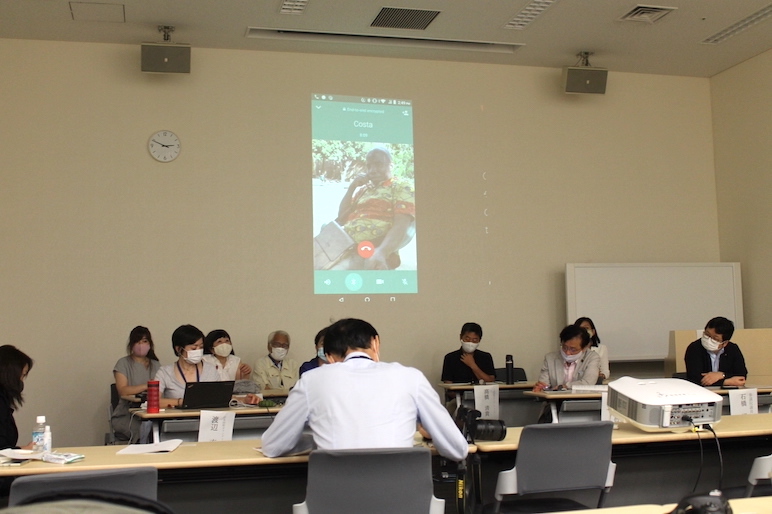 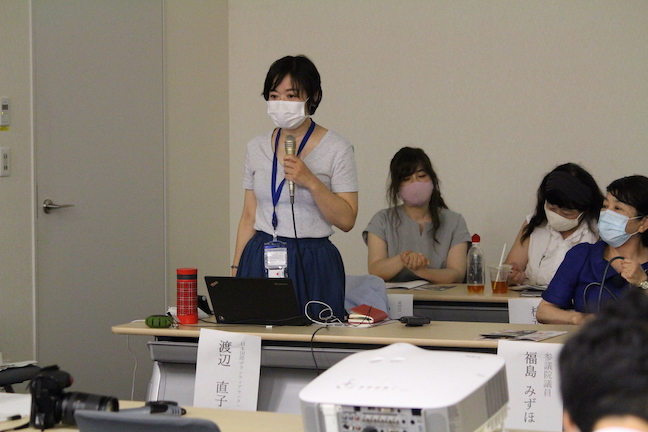 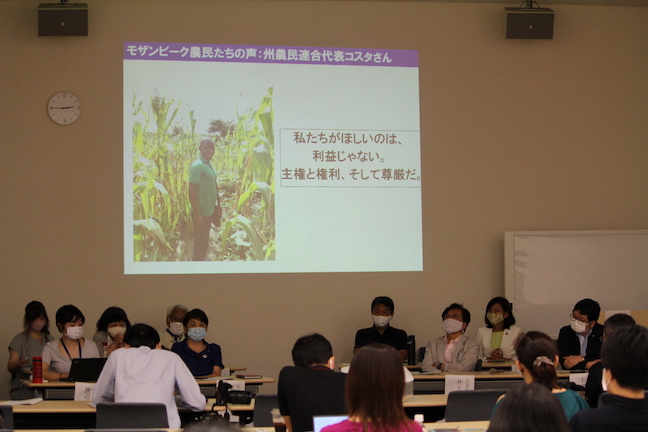 A press conference following the end of the ProSAVANA project.

Advocacy on conflict and peacebuilding

In Japan, 25 lawsuits have been filed nationwide against the unconstitutionality of the Security Law, which can be called a de facto “constitutional revision” of Article 9 of the Constitution. In a lawsuit at the Miyazaki District Court, Imai, the president of JVC, appeared as a witness for the plaintiffs in a lawsuit filed in the Miyazaki District Court in October. Based on the incidents that happened in South Sudan, he testified that Kaketsuke-keigo (rush protection) and joint protection of campsites could lead to the use of force prohibited by the Constitution. He also served as a lecturer at a pre-conference study session organized by the lawyers. Some participants said that they were able to understand the reality in the conflict area, which they would not normally know, and deepen their awareness of the dangers of the Security Law. Through these activities, we were able to convey our awareness of issues and concerns about Japan’s security policy as an NGO working for international cooperation. 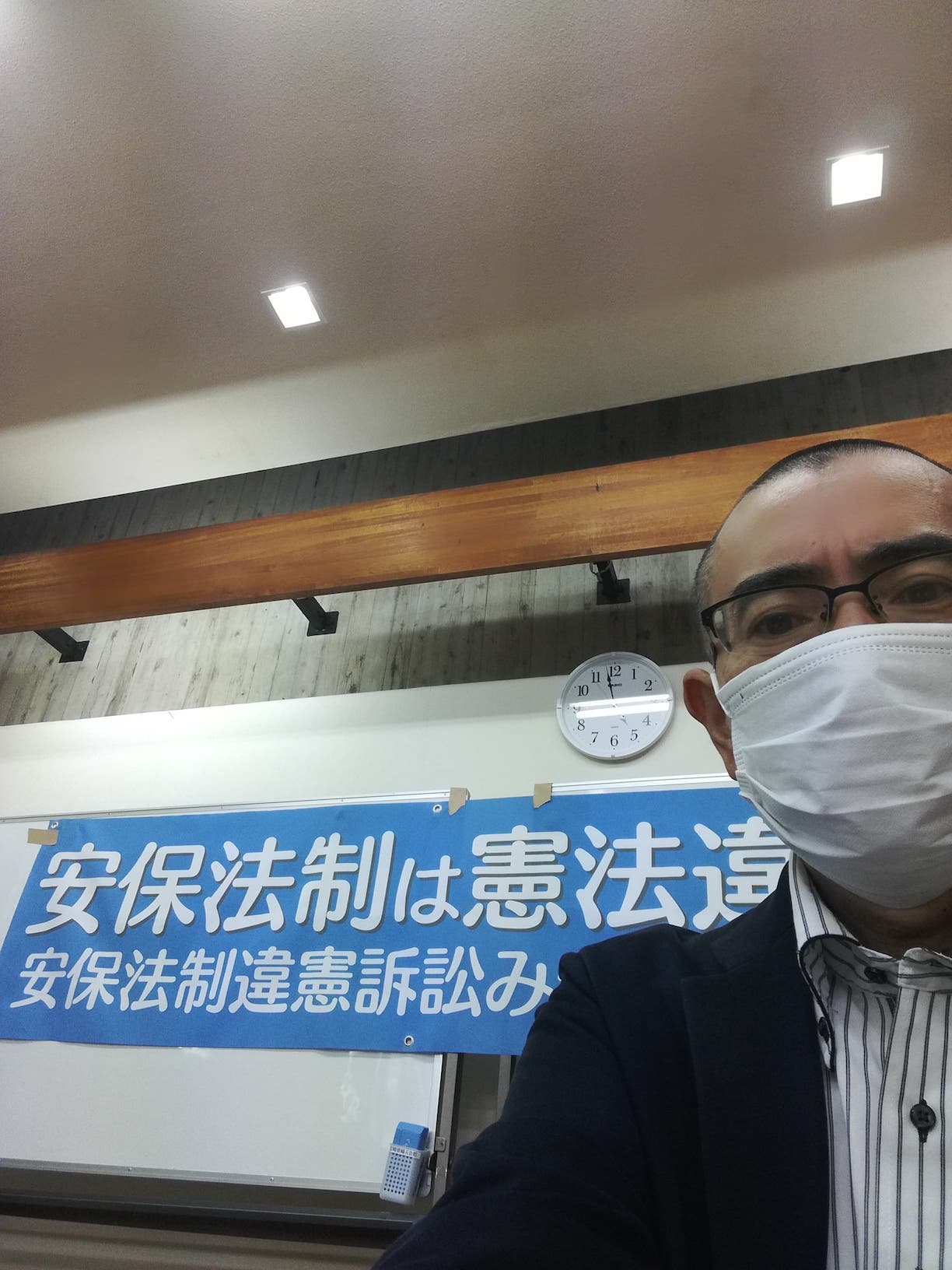 President Imai gave a report to the plaintiffs in the lawsuit against the unconstitutionality of the Security Law at the Miyazaki District Court.

Since the end of fiscal year 2020, we have started activities in the form of policy recommendations to prevent Japanese funds and taxes from harming the rights and lives of people around the world. In Burma/Myanmar, a coup d’état by the national army took place on February 1, 2021. It has been pointed out that business profits from Japanese companies are flowing into the national army. In order to protect people including children from the ongoing killings, detentions and repression, it is important to cut off the sources of funding for the national army. Even before the coup, we pointed out the financial ties between the army and Japanese companies and have been calling for the elimination of these financial ties. In cooperation with other organizations working on the theme of business and human rights, we have submitted requests to the UN, private corporations, and the Japanese government. We also hold seminars with citizens to discuss issues and take action to ensure that businesses and policies do not harm people. We do not want our money to go around and take the human rights or lives of people in other countries. With this in mind, we focus on policy advocacy activities not only overseas but also in Japan. Your donations are used for activities that transcend national borders to create a society where human rights and respect for life are given utmost importance and will not be taken for granted. Advocacy in cooperation with other organizations such as Mekong Watch and FoE Japan.

Main proposals and statements delivered in the fiscal year 2020

“The Government of Japan and JBIC must stop massive public financing of natural gas development that is harmful and hurts people.” (Mozambique)