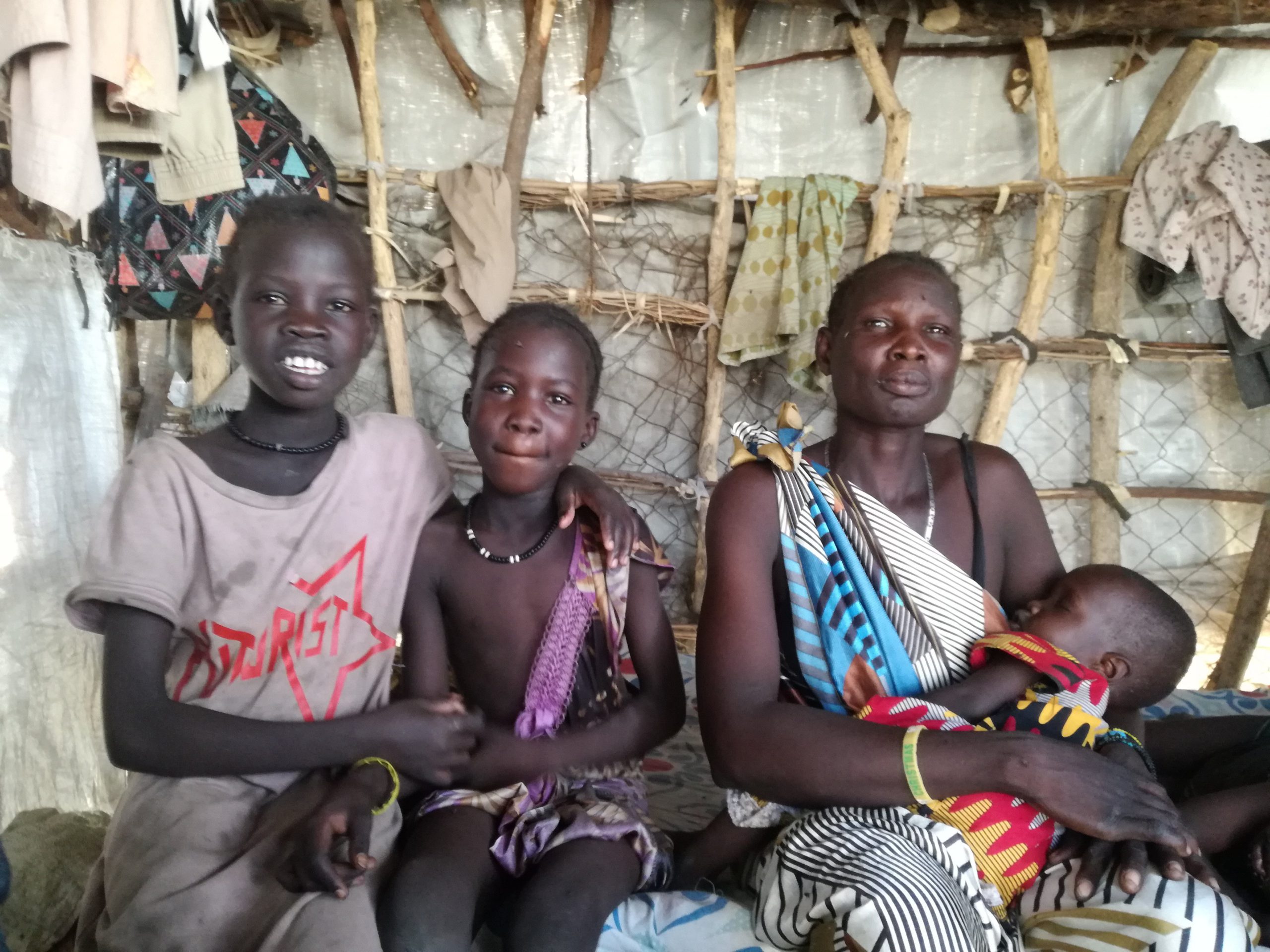 Hello everyone. My name is Ami, and I’m an intern here at JVC.

Do you know what is happening in South Sudan? I think that only someone who’s very well read in international affairs would know about this. I’m embarrassed to say that I’m not sure if I would have known about this if I weren’t an intern here at JVC.

After gaining independence in 2011 following a long civil war, South Sudan became the world’s newest country. Currently, there are many internally displaced people in South Sudan who fled from repeated flooding and armed conflict, and they are on the verge of a serious humanitarian crisis. I hope that this blog post will give you some insights into the current circumstances of the people in South Sudan.

“We are being killed for political means”: An appeal from those whose lives are at the mercy of others 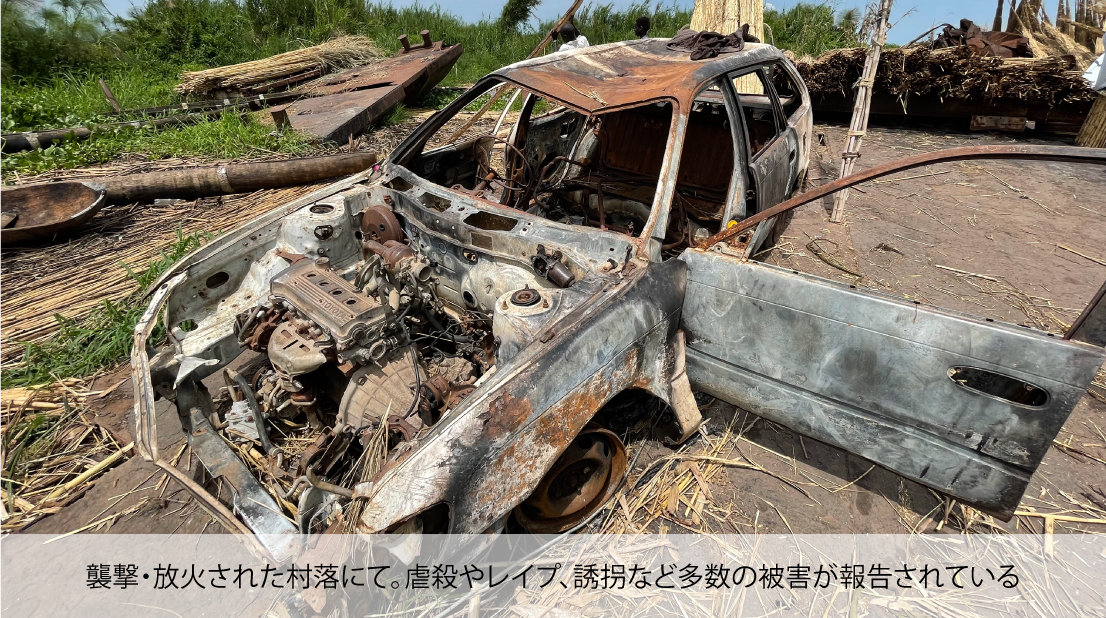 In a village that was attacked and set on fire. Massacres, rapes, kidnappings, and many other incidents have been reported.

This led to widespread attacks by armed groups on villages in the county. By the time the situation calmed down in mid-April, more than 80,000 people were internally displaced, according to local NGOs.

The reasons behind the conflict at the military facility and the armed attacks on villages are said to be tensions between politicians and the military, both hostile forces in South Sudan, as well as strategic tactical advances. We spoke with a leader of a displaced community, who told us, “We are being killed for political means.”

Inadequate support: the plight of a people living outdoors without any food 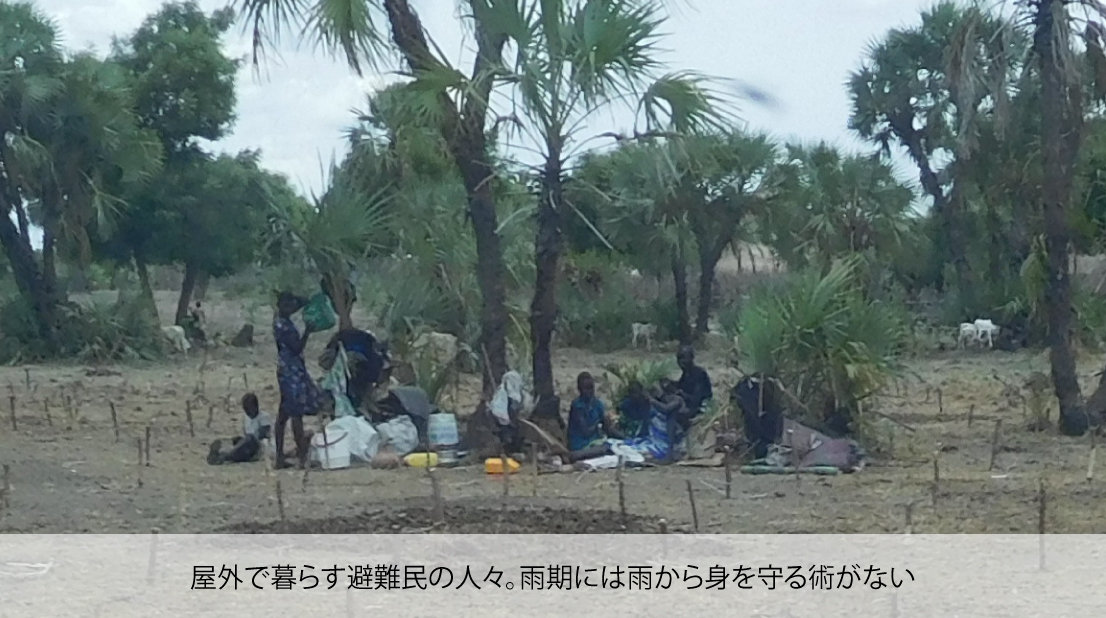 Displaced people living outdoors. They have no way to protect themselves from rain during the rainy season.

Unity State initially suffered tremendous damage from flooding. These floods lasted from 2019 through 2021 and were said to be a “once in 60 years event,” ultimately affecting more than 220,000 people. The state capital, Bentiu, one of the locations affected by the floods, houses a considerable number of UN agencies and international NGO offices that provide humanitarian assistance. However, Leer Country in the south, for example, has not received sufficient support due to the limited number of organizations active in the area.

Despite the already challenging circumstances, the armed conflict displaced many more people, and the situation only worsened from there.

Many families have been displaced by the village raids, and they evacuated with just their children and almost no belongings. They have no means of earning money besides selling firewood that they have collected, and it is difficult for them to procure even a bare minimum amount of food. 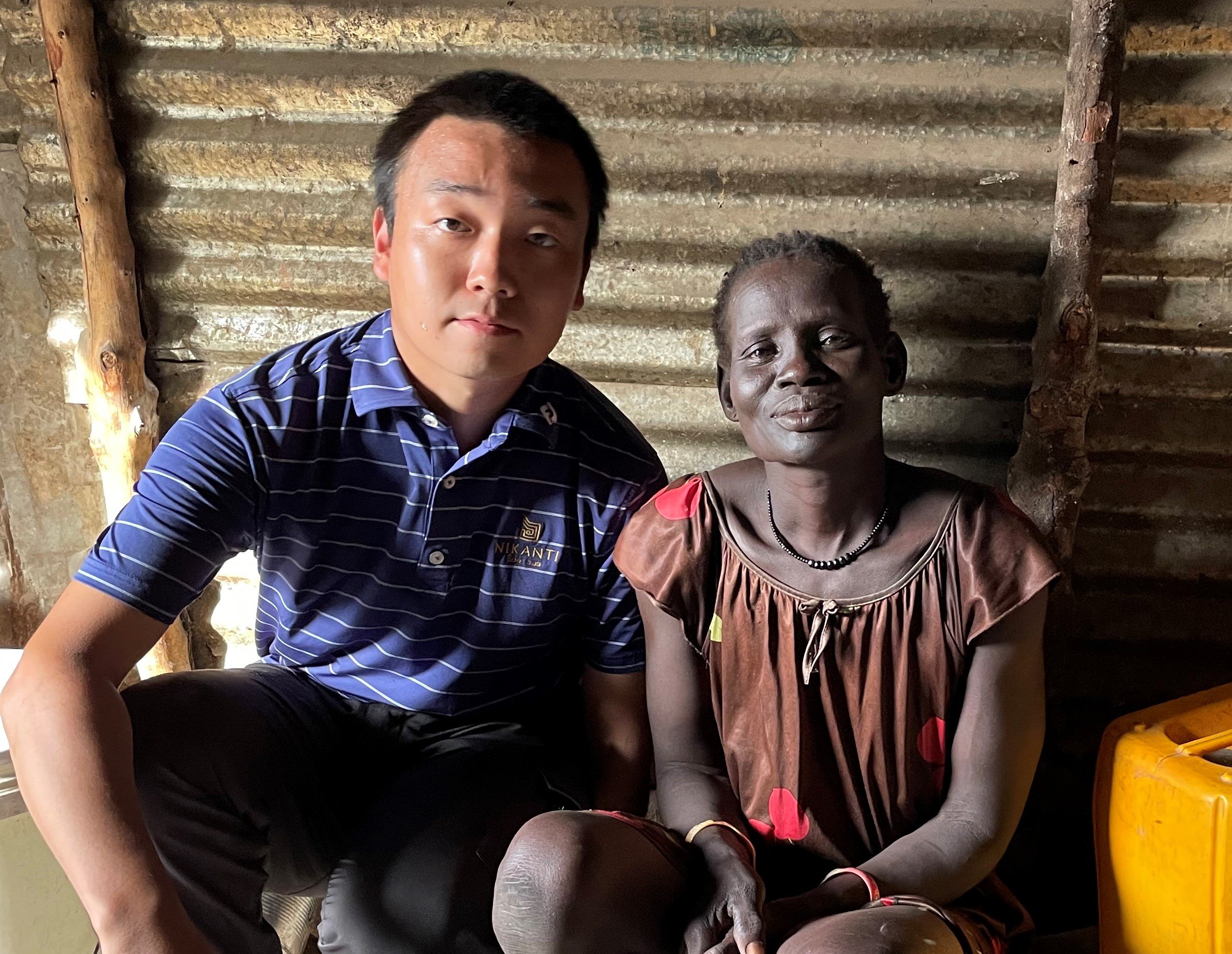 South Sudan gained independence in July 2011, after half a century of civil war. However, only two years later, the country fell into civil war again, and, since 2019, flooding has affected seven states across the country. Most recently, people have lost their lives due to attacks by armed forces. Those who have managed to escape have been trapped in a situation that leaves them hopeless for survival.

The fragile government has failed to cope with these catastrophes since the beginning of independence (if this was not their politically strategic, deliberate plan). Although UN agencies continue to provide much-needed assistance, they remain unable to support the ever-increasing number of internally displaced people. Being helplessly tossed about in an endless state of emergency, the reality of these people’s lives is unimaginably cruel, as they are evacuated over and over again.

It is all that people can do to escape as quickly as possible with their children when all they know is that someone is coming to kill them. They jump into the Nile River, fully clothed, hiding in the water until night falls, and finally stepping foot on a small island in the middle of the river after sunrise. They move through the river at night because they would be found and killed if they were spotted during the day. Attempting to flee to areas that are protected by UN peacekeeping forces, many witnessed their children get attacked by vicious animals leaping down from trees, and many died by drowning in the marshy waters, being bitten by poisonous snakes, or being preyed upon by crocodiles.

There was a case where, even though they managed to reach the refugee camp and their fear of being killed was lifted, one person’s father suffered great mental illness brought about by these horrific experiences, and he died from his ailments. Additionally, the lack of aid means that the living conditions are quite harsh, with thousands of people defecating in the open every day due to a lack of toilets, eating the flavorless roots of plants only once per day, and drinking dirty water to survive.

Furthermore, many of the displaced people spend the night sleeping on the ground without as much as a roof over their heads. When the rainy season is in full swing, adults and children alike spend sleepless nights drenched by torrential downpours. This is an infringement on the most basic of human dignities.

When I visited the displaced persons camp, some of the displaced people shared their harsh experiences with me, asking me to tell their situation to the Japanese people. They told me that various groups had come to talk with them in the past, but nothing had happened afterwards.

During my trip to South Sudan, I was repeatedly overwhelmed by the devastation that far exceeded my expectations. The floods in South Sudan submerged such a vast area that I could hardly believe my eyes; I felt that the label “natural disaster” was very appropriate. The poor sanitary conditions of the refugee camps also caused me to fall ill, and I had to go to the hospital to be treated.

I’ve since recovered and I’m now able to return to Japan, but the refugees in the camp have nowhere else to go. I wonder why these people are made to suffer continuously for years and years, even though they’re human just like you or me, and we all share the same earth. We will not overlook this situation, and although we may not have much to contribute, we will do our best to deliver support so that these displaced people can at least form a shelter to shield themselves from the rain.

We sincerely ask for your support.

The words of Hashiguchi convey the pressing situation taking place in South Sudan. In Japan, it’s hard to imagine having to flee for your life without even taking any belongings with you, having to spend the night without any shelter from the wind or rain, or having to defecate in the open every day.

Just because it is not widely covered in the media doesn’t mean that it’s not a serious problem. There are countries where a serious humanitarian crisis is imminent, and JVC will work to help the displaced people of South Sudan at least get a roof over their heads. Please think about the displaced people in South Sudan and help us in supporting them.