As detailed in this previous report, nearly 90% of the children who have completed the supplementary schooling are still continuing their studies at regular school. The following is a case study of one mother that illustrates JVC’s support and the changes that have been brought about by this initiative.

▼This video introduces the initiative.

Cooperation among parents, administration, and teachers

In our supplementary schooling initiative, we not only conduct classes, but we also work to remove the barriers to regular school attendance by raising awareness in the community and providing support to strengthen ties between the parents, administration, and teachers. 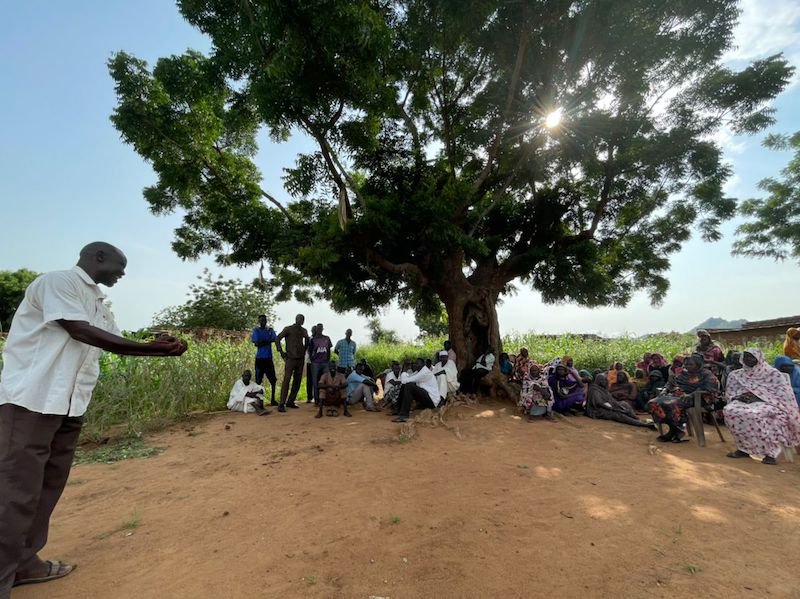 A meeting is held under a large tree in the center of the community in Tilow to strengthen cooperation. The number of displaced persons in Tafari has increased significantly over the past year or two, but groups of people from several places of origin are voluntarily having discussions.

In addition to educating participants about the importance of schooling in an easy-to-understand fashion, we also reviewed current challenges and identified the role that each participant should play. The following are some of the suggestions from participants.

Mr. Hammad of the Kaduqli County Department of Education said, “Many young people in this region join the military in their late teens. Whether they join the military, become a farmer, sell goods at the market, or become cattle herders, receiving an education will allow them to find a better technique that they can use on the path they choose.” The parents in attendance nodded their heads in agreement.

The passion of a mother, Um Kalam

Um Kalam, a mother from Gardud, was inspired by these activities. In 2020, she enrolled her daughter in the supplementary school. She volunteered her time and dedication to the school by cooking lunches, cleaning, following up with absent children, and encouraging other mothers to join the school, as well. 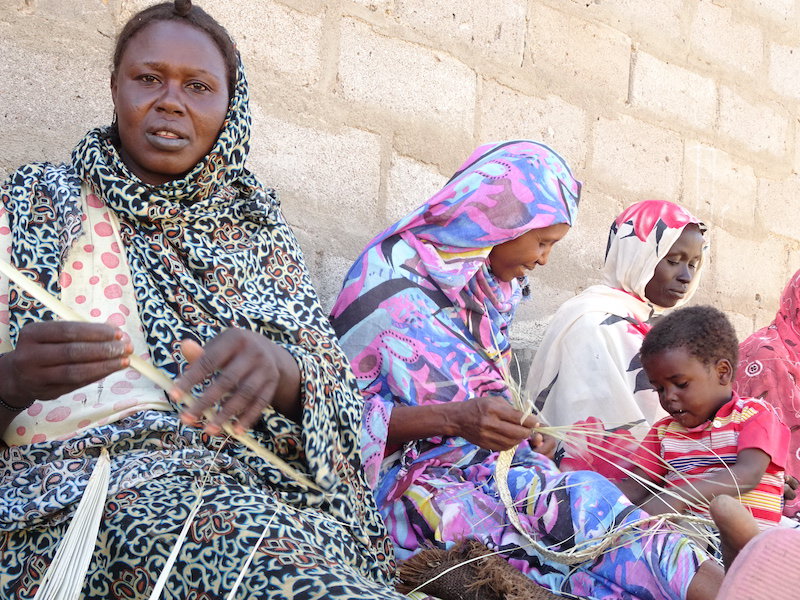 Um Kalam makes brooms to sell at the market while also cooking for the students at the supplementary school.

“I was taking care of cattle when I was a kid, so I never went to school, and I can’t read or write. It’s awful! Of course, it’s time consuming to come every day and help out, but I don’t mind because all women in Sudan are busy. I’m doing it for God, so I don’t mind,” she says with a laugh.

At the ceremony commemorating the completion of the 6-month program, she burst into tears of joy. “My daughter didn’t understand anything at first, but now she can read, write, and do anything. I’m really so happy. But there are still so many children in our town who are not in school. I hope that you will continue the school for them,” she pleaded with an earnest expression on her face. 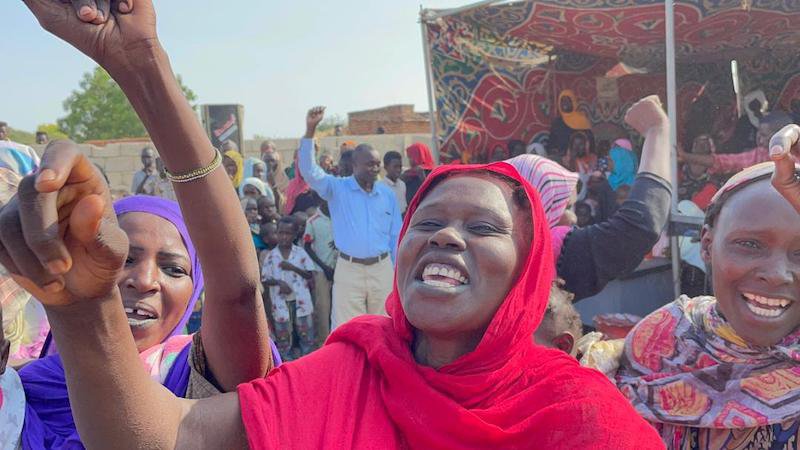 The community took responsibility for organizing the completion ceremony, which included skits, dances, and awards for outstanding students. This event also raised awareness for education in the community. 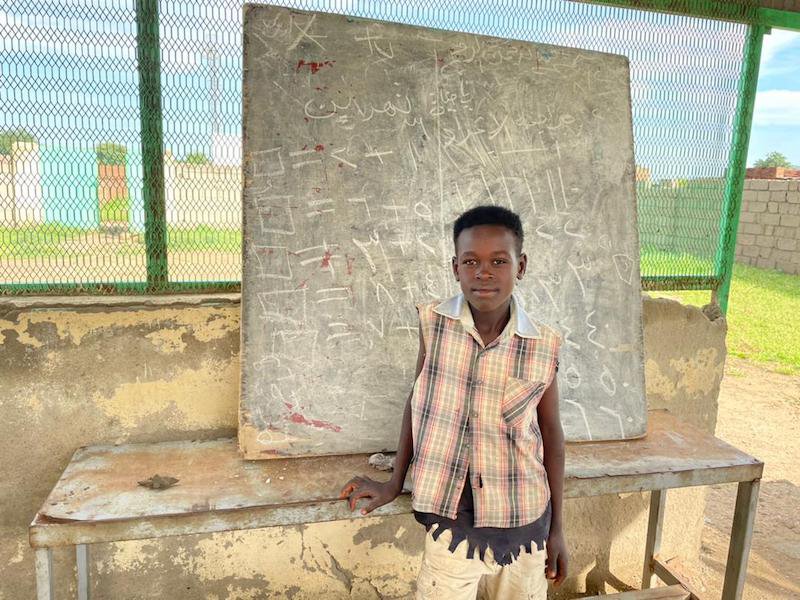 Houd stands in front of the blackboard. “My favorite subject is Islam because the Qur’an is the word of God,” he says.

Although this is Houd’s first time studying, he was able to transfer to the third grade of regular elementary school with the #4 top grade on the final exam out of 46 students.

When we visit his regular class, Houd seems shy as he talks to us. “I have no problem with my studies now. In the future, I want to study at a university, and I want to graduate. I want to become a teacher and teach math and Arabic. I’m thankful to my mother who came to watch over me at the supplementary school. I’m also grateful for JVC because they gave me the opportunity to study.” 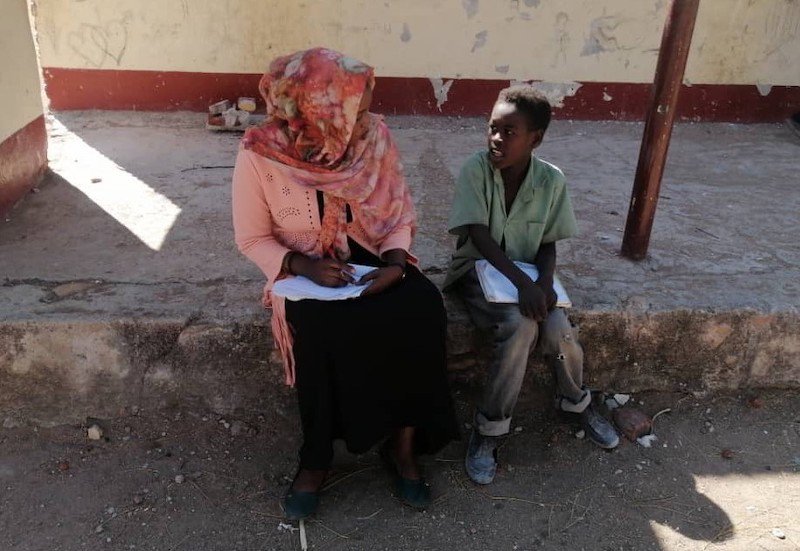 In continuing education, it is not enough to open a supplementary school and conduct classes. The importance of strengthening the partnership between the community, the school, and the administration, as well as educating the parents, cannot be understated. In two years, nearly 700 students have transferred to regular school, and stories like those of Houd and Marghani are just a few of many. We hope you will continue to show your support from Japan for these children affected by conflict and their bright futures. We are accepting donations for this cause!